Would you like to audition for Arthur Miller’s “All My Sons”? 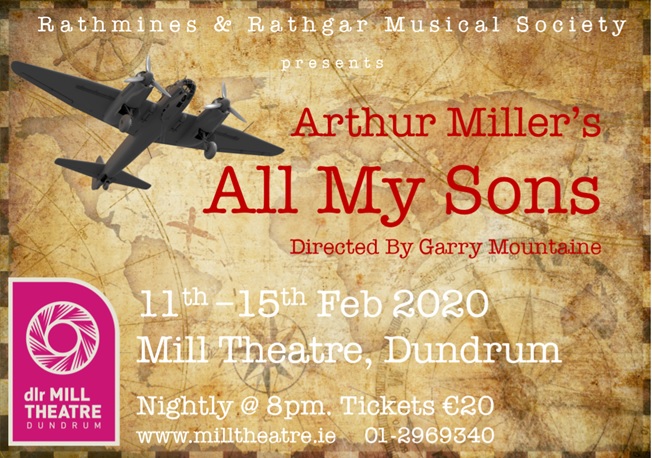 The Rathmines & Rathgar Musical Society are pleased to announce our up coming show “All My Sons” coming to dlr Mill Theater Dundrum.

The auditions will take place on Wednesday 27th November from 8 pm, at the Rathmines and Rathgar Musical Society premises.

Auditions are by application and appointment only.

All my sons is set in America 1947. Despite hard choices and even harder knocks, Joe and Kate Keller are a success story. They have built a home, raised two sons and established a thriving business. But nothing lasts forever and their contented lives, already shadowed by the loss of their eldest boy at war, are about to shatter. With the return of a figure from the past, long buried truths are forces to the surface and the price of their American dream is laid bare.

This is a gripping story and not to be missed.

Joe Keller (“Keller”) — Joe, 60, was exonerated after being charged with knowingly shipping defective aircraft engine cylinder heads (for Curtiss P-40 Warhawks) from his factory to the military during World War II, causing the deaths of 21 pilots. For over three years he has placed the blame on his partner and former neighbor, Steve Deever, although he himself committed the crime. When the truth comes out, Joe justifies his actions by claiming that he did it for his family.

Kate Keller (Mother) — Kate knows that Joe is guilty but lives in denial while mourning for her older son Larry, who has been MIA for three years. She refuses to believe that Larry is dead and maintains that Ann Deever — who returns for a visit at the request of Larry’s brother Chris — is still “Larry’s girl” and also believes that he is coming back.

Chris Keller — Chris, 32, returned home from World War II two years before the play begins, disturbed by the realization that the world was continuing as if nothing had happened. He has summoned Ann Deever to the Keller house in order to ask her hand in marriage, but they’re faced with the obstacle of Kate’s unreasonable conviction that Larry will someday return. Chris idolizes his father, not knowing initially what he has done.

George Deever — George, 31, is Ann’s older brother: a successful New York lawyer, WWII veteran, and a childhood friend of Chris’s. He initially believed in his father’s guilt, but upon visiting Steve in jail, realizes his innocence and becomes enraged at the Kellers for deceiving him. He returns to save his sister from her marriage to Chris, creating the catalyzing final events.

Ann Deever — Ann, 26, arrives at the Keller home having shunned her “guilty” father since his imprisonment. Throughout the play, Ann is often referred to as pretty, beautiful, and intelligent-looking and as “Annie”. She had a relationship with Larry Keller before his disappearance and has since moved on because she knows the truth of his fate. She hopes that the Kellers will consent to her marriage to Larry’s brother, Chris, with whom she has corresponded by mail for two years. Ann is the truth-bearer in the play.

All My Sons
Scroll to top