IRELAND’S PREMIER GROUP , THE RATHMINES AND RATHGAR MUSICAL SOCIETY, ANNOUNCE THE
LAUNCHING OF THE ‘R&R JUNIORS’.

THE SOCIETY HAS BEEN PRODUCING HIT MUSICALS AND OPERETTA FOR THE IRISH PUBLIC SINCE
1913 AND THIS YEAR SEES THE BEGINNING OF A NEW ERA, WHERE STAGE STRUCK KIDS AND STARS
OF THE FUTURE, UP TO EIGHTEEN YEARS OF AGE, CAN AUDITION FOR MEMBERSHIP AND APPEAR IN
THE ‘R&RJRS’ FIRST PRODUCTION OF ‘MATILDA JR’ THE FUTURE STARS WILL BENEFIT FROM
WORKING WITH A PROFESSIONAL PRODUCTION TEAM AND REHEARSALS, WHICH WILL INCLUDE A
WEEK LONG CAMP (AUGUST 15-19) WILL TAKE PLACE DURING THE SUMMER BREAK, IN THE
SOCIETY’S STUDIOS IN RATHMINES.

SO, IF YOU FEEL THAT YOU HAVE A POTENTIAL MATILDA, MISS HONEY OR EVEN A TERRIFYING
AGATHA TRUNCHBULL IN THE HOUSE, WHY NOT LET US KNOW AND THEY COULD BE STARRING AT
THE MILL THEATRE, NEXT SEPTEMBER 13TH TO 17TH, IN A FULLY STAGED PRODUCTION. 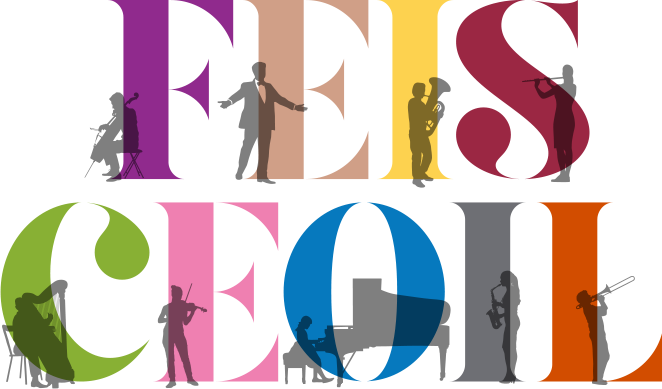 The Feis Ceoil comprises almost 200 competitions and attracts over 5,000 participants from all over Ireland every year. View the full list of competitions with Syllabus details.

A Message from the CEO of Feis Ceoil

I hope this finds you very well since I was last in touch.  My last email was to announce the unfortunate cancellation of Feis Ceoil 2020, which seems like a lifetime ago now!

I wanted to send you an update on plans for Feis Ceoil 2021, which I am delighted to say is going ahead.  After much deliberation, and many changes of plan, we decided to proceed with Feis Ceoil online this year.  Although this will be radically different, we felt it was vital to provide this platform and vehicle for feedback to competitors, despite the inherent challenges.  Further, competitors missed out on the many awards and bursaries we have to offer, courtesy of yourselves, so we want to be able to offer those this year.  Unfortunately we could not offer choir, orchestra, conducting, piano duet or sight-reading competitions this year, but our remaining 134 competitions will go ahead.

Competitors will be asked to submit video recordings via their competitor portal on our website, which will be uploaded for viewing and adjudication.  As with a normal Feis however, a number of competitions will be scheduled for each day, and only those competition videos will be accessible that day, and for that day only.  In the case of junior competitions, while the adjudicator will be able to view the full video, the public will only be able to access the audio recording, in the interest of child protection.

Lerner & Loewe’s Tony Award winning masterpiece about Eliza Doolittle, a Cockney flower girl who takes speech lessons from professor Henry Higgins, a phoneticist, so that she may pass as a lady is bursting with hit after hit including Wouldn’t It Be Loverly?, The Rain in Spain, I Could Have Danced All Night, On The Street Where You Live and Get Me to the Church on Time. 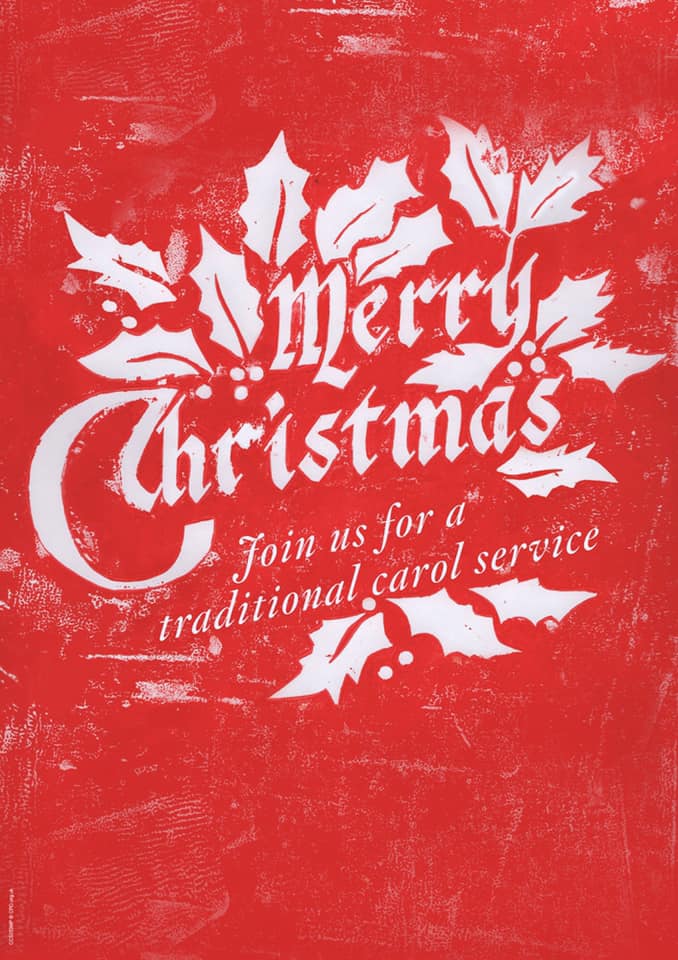 To get you into the festive mood, Rathmines and Rathgar Musical Society will perform
‘An Evening of your favorite Carols’ on Saturday 7th December at 8 pm at their premises 67/69 upper Rathmines Road, Dublin 6.
Hope you can join us.
Tickets available on the night at the door .

Would you like to audition for Arthur Miller’s “All My Sons”?

The Rathmines & Rathgar Musical Society are pleased to announce our up coming show “All My Sons” coming to dlr Mill Theater Dundrum.

The auditions will take place on Wednesday 27th November from 8 pm, at the Rathmines and Rathgar Musical Society premises.

Auditions are by application and appointment only.

All my sons is set in America 1947. Despite hard choices and even harder knocks, Joe and Kate Keller are a success story. They have built a home, raised two sons and established a thriving business. But nothing lasts forever and their contented lives, already shadowed by the loss of their eldest boy at war, are about to shatter. With the return of a figure from the past, long buried truths are forces to the surface and the price of their American dream is laid bare.

This is a gripping story and not to be missed.

Joe Keller (“Keller”) — Joe, 60, was exonerated after being charged with knowingly shipping defective aircraft engine cylinder heads (for Curtiss P-40 Warhawks) from his factory to the military during World War II, causing the deaths of 21 pilots. For over three years he has placed the blame on his partner and former neighbor, Steve Deever, although he himself committed the crime. When the truth comes out, Joe justifies his actions by claiming that he did it for his family.

Kate Keller (Mother) — Kate knows that Joe is guilty but lives in denial while mourning for her older son Larry, who has been MIA for three years. She refuses to believe that Larry is dead and maintains that Ann Deever — who returns for a visit at the request of Larry’s brother Chris — is still “Larry’s girl” and also believes that he is coming back.

Chris Keller — Chris, 32, returned home from World War II two years before the play begins, disturbed by the realization that the world was continuing as if nothing had happened. He has summoned Ann Deever to the Keller house in order to ask her hand in marriage, but they’re faced with the obstacle of Kate’s unreasonable conviction that Larry will someday return. Chris idolizes his father, not knowing initially what he has done.

George Deever — George, 31, is Ann’s older brother: a successful New York lawyer, WWII veteran, and a childhood friend of Chris’s. He initially believed in his father’s guilt, but upon visiting Steve in jail, realizes his innocence and becomes enraged at the Kellers for deceiving him. He returns to save his sister from her marriage to Chris, creating the catalyzing final events.

Ann Deever — Ann, 26, arrives at the Keller home having shunned her “guilty” father since his imprisonment. Throughout the play, Ann is often referred to as pretty, beautiful, and intelligent-looking and as “Annie”. She had a relationship with Larry Keller before his disappearance and has since moved on because she knows the truth of his fate. She hopes that the Kellers will consent to her marriage to Larry’s brother, Chris, with whom she has corresponded by mail for two years. Ann is the truth-bearer in the play. 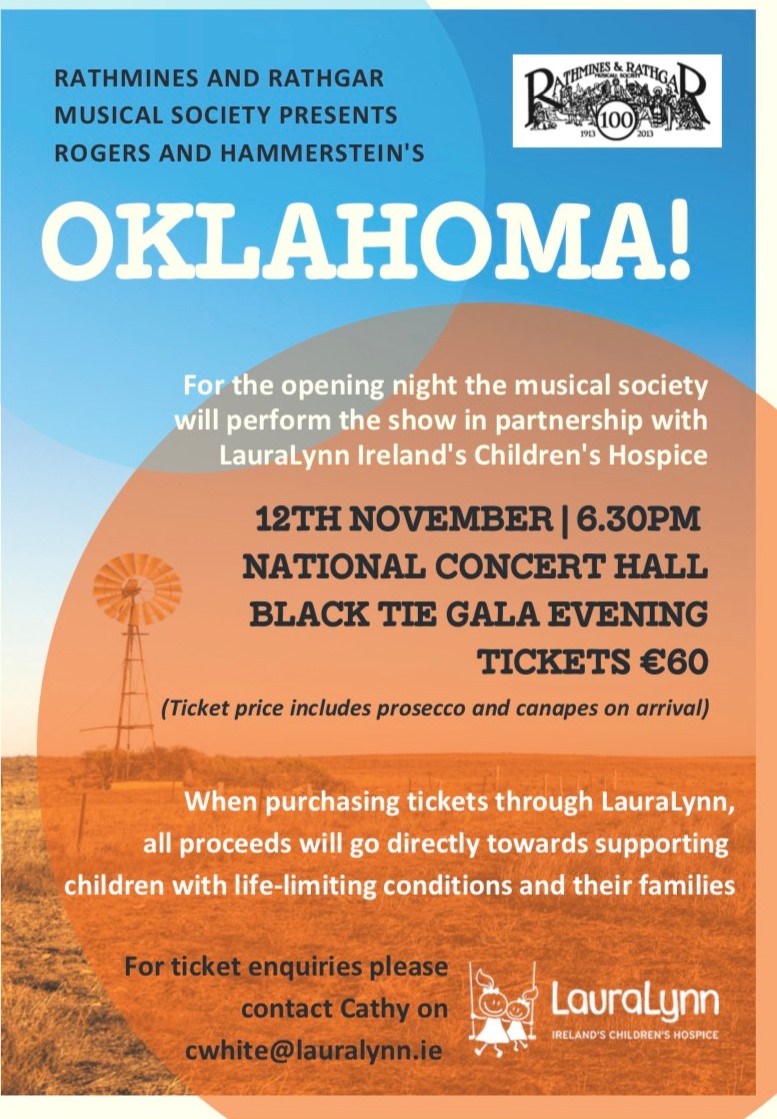 For the opening night which takes place on November 12th, 2019 the musical society will perform the show in partnership with LauraLynn, Ireland’s Children’s Hospice.

Tickets are priced at €60 and when purchased through LauraLynn, all proceeds will go directly towards supporting children with life-limiting conditions and their families.

It is a night not to be missed, patrons will be greeted with prosecco reception alongside some nibbles to kick start a night filled with joy, music and laughter. 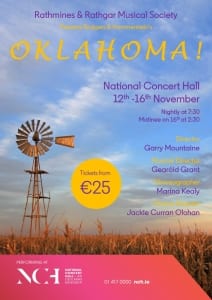 The iconic Oklahoma! makes a welcome return to the National Concert Hall courtesy of Ireland’s favourite musical society this autum. Rodgers and Hammerstein’s much-loved musical is packed full of some of musical theatre’s most memorable tunes, including ‘The Surrey With the Fringe on Top’ ‘Oh, What a Beautiful Mornin’’Kansas City’ – not to forget the evergreen favourite title song – Oklahoma!

This fully-staged performance, with live orchestra and the renowned chorus of The R&R will have you tapping your toes and singing along, so make sure to book your seat now by calling the Box Office +353 (0)1 417 0000 or www.NCH.ie

We are delighted to share pictures of R&R Cup and Forde-Taylor prize winners.